The Colorado River, which is the boundary between Arizona and California, forms the eastern and southern boundaries of the District. The valley is relatively level; approximately 9 miles wide, 30 miles long and ranging in elevation above sea level from about 290 feet at the northern end to about 220 feet at the southern end. The soils are alluvial in nature, laid down in past years by Colorado River floods; and range in texture from fine grain clays to silty loams to light sandy soils, with the predominant soil being a sandy loam. The entire valley is underlain with permeable sand at shallow depths.

The Palo Verde Valley with its long, hot growing season is ideal for agriculture; crops are grown and harvested year round. Mild winters, with a minimum of frost, permit growing of many crops not suitable for production in other areas.

Blazing new trails with the Palo Verde Irrigation District to help California reduce its use of Colorado River Water, Metropolitan Water Districts board of directors has approved a 35 year program that will pay farmers to annually set aside a portion of their land, rotate their crops, and transfer saved water to urban Southern California.

This is a list of ways you can help to conserve water in the home, yard and farm.

The following is in regards to the Farm Plan submission. 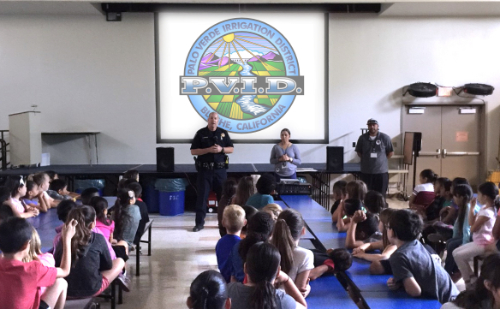 Palo Verde Irrigation District sponsors a yearly Safety Program in cooperation with the California Highway Patrol, through all the schools throughout the Valley. We visit each school, show slides of the canals and drains in our valley, and pass out the “Big Al” safety book. We talk to the children about canal safety and impress upon them to “Be Cool, Swim in a Pool”.